The earliest known lighthouse was the Lighthouse of Alexandria, built in 280 B.C. It was an estimated 400 feet tall with a range of twenty-nine miles, and was considered by classical writers as one of the seven wonders of the world. Construction of lighthouses was sporadic in Roman times, with two notable lighthouses built at Dover following Rome’s conquest of Britain.

Lighthouse construction was non-existant in the Dark Ages, and did not resume until Edward the Black Prince built a forty-foot tower in Corduan, France in 1481. King Henri III had the Corduan tower rebuilt in 1481 as an ornate, tiered structure with opulent king’s quarters and elaborate decorative murals. The Corduan lighthouse became a national symbol of French military power and prestige.

The influence that the Lighthouse of Alexandria and Corduan Lighthouse had on future lighthouses cannot be understated. These lighthouses transcended their function and captured man’s imagination, leading future generations to view lighthouses not just as navigational aids, but as architectural specimens defining their surroundings and symbolizing power and prestige.

As Britain became the world’s dominant naval power, it built lighthouses around Scotland, Denmark, England, and elsewhere. Britain’s main competitor for naval supremecy, Spain, built lighthouses along coasts under its control, including one in Saint Augustine, Florida in 1586. The lighthouse was burned down in 1668 during an attack by the British, however. It was not until 1716 that another lighthouse was built in America, when Boston Light was built on Little Brewster Island.

The Ninth Act of the first Congress established the United States Bureau of Lighthouses. As a testament to the importance of lighthouses, the Act was passed before the Judiciary Act, Patent Act, Copyright Act, Postal Service Act, Census Act, and Militia Act. Lighthouses would later be placed under the control of the Department of Revenue, Department of Treasury, Department of Commerce, and Coast Guard.

In 1820, control of lighthouses fell to the Fifth Auditor of the Treasury, Stephon Pleasonton. Mr. Pleasanton maintained the role for thirty-two years, despite having little maritime knowledge or experience. Pleasonton’s tenure was marked by a stubborn insistence on using outdated parabolic lenses, by repeated conflicts with shippers, and by complaints of poor lighthouse conditions and construction.

Progress was limited, however, by Mr.Pleasonton’s centralized, bureaucratic, and stubborn leadership. French scientist Augustin Fresnel had invented a lens in 1922 that was far superior to the Argand parabolic lenses which Mr. Pleasonton stubbornly insisted on using. It was not until the 1840s that Mr. Pleasonton tested the Fresnel lens in America, however, and even then did so only when compelled by an act of Congress.

Symbolic of the poor construction of the era, the Fort Gratiot lighthouse was built so poorly that the lighthouse keeper had to turn sideways to ascend the stairs. The Bois Blanc Island lighthouse was so poorly conceived and constructed that it fell into Lake Huron just eight years after it was built.

Following decades of complaints from shippers about the inferior quality of existing lighthouses, Congress divided the country into eight lighthouse districts in 1838, placing each district under the command of a naval officer. The next twenty years saw increased lighthouse construction along Michigan’s shores.

Shippers still complained, however, that the new lighthouses were built poorly with inferior lenses. In 1851, Congress ordered a comprehensive investigation into the condition of the country’s lighthouses. As a result of the investigation, Congress established the U.S. Lighthouse Board the following year. The board was staffed with the same experts that had spearheaded the congressional investigation. Mr. Pleasonton was relieved of his duty.

Armed with the knowledge from their investigation and with the backing of Congress and industry leaders, the Lighthouse Board set about building numerous new lighthouses, renovating inferior lighthouses, and replacing the inferior parabolic lenses with Fresnel lenses. By 1864, every lighthouse in the United States had a Fresnel lens.

Owing in large part to the improved administration provided by the Lighthouse Board, lighthouse construction flourished in Michigan in the mid to late 1800s. More than fifty percent of Michigan’s lighthouses were built during this period. By the end of the century, nearly every port and harbor on Michigan’s shores had a lighthouse. Nationwide, the United States had the most lighthouses in the world.

Critical to the function of Michigan’s lighthouses were the hundreds of civil servants serving as lighthouse keepers. Thomas Jefferson recognized their importance to the function of the country’s shipping industry, remarking, “The keepers of lighthouses should be dismissed for small degrees of remisness, because of the calamaties which even these produce.” In the early 1800s keepers were appointed by the President himself.

The life of a lighthouse keeper was difficult. Lighthouse keepers needed knowledge ranging from mechanical to meteorological to nautical. The salary was low. By 1860, keepers were paid a uniform annual salary of $600 (only $8,500 adjusted for inflation). With few exceptions, only one lighthouse keeper was appointed per lighthouse.. The hours were difficult. The oil lamps had to be lit at dusk, wicks monitored through the night and trimmed regularly, fuel replenished, clockworks wound, and lenses cleaned. If there were mechanical problems, keepers were often left to their own devices to improvise a fix. The Department of Treasury issued strict instructions to lighthouse keepers. Per the 1835 “Instructions to the Lightkeepers of the United States,” lightkeepers were to “light the lamps every evening at sun-setting and keep them continually burning, bright, and clear till sun-rising.” Wicks had to be trimmed every four hours, “taking care that they are exactly even on top.” The quantity of oil that was burned had to be logged precisely and reported to the superintendent. Sale of liquor was strictly prohibited. Keepers were to “treat with civility and attention such strangers as may visit the lighthouse.” In what was perhaps the most onerous of the instructions, lighthouse keepers were commanded, “You will not absent yourself from the lighthouse at any time, without first obtaining the consent of the Superintendent, unless the occasion is so sudden and urgent as not to admit of an application to that officer, in which case by leaving a suitable substitute, you may be absent for twenty-four hours.”

Perhaps the most challenging aspect of life for lighthouse keepers was the solitude inherent in manning lighthouses deliberately placed in such remote locations. While the remoteness Michigan’s lighthouses is romanticized by tourists strolling by on summer vacations soon to return to their cottages or hotels, the lighthouse keepers were bound to remain there through storms, blizzards and squalls, and on weekends, holidays, and through the duration of seemingly endless winters. An 1875 annual report acknowledged the loneliness faced by the lighthouse keepers, and proposed providing reading materials to help pass the time. “By so doing, keepers will be made happier and more content with their lot, and less desirous of absenteeing themselves from their post,” the report concluded.

Michigan’s lighthouse construction continued through the early 1900s, but slowed considerably by 1930 with the decline in the lumber industry and the advent of the Great Depression. Relatively few lighthouses in Michigan were built after the 1930s. By the time the country rebounded from the Great Depression, new technology made navigation possible without assistance from lighthouses. Only one lighthouse, the Robert Manning Memorial Lighthouse, was built in the last thirty years in Michigan. Over the same period, technological advances led to automation of lighthouses. Electricity had already made lighthouse keepers less important. Automation would be the final blow to the profession. In 1983, Michigan’s last lighthouse keeper left his post at Point Betsie Lighthouse, as all of Michigan’s lighthouses had transitioned to automated systems, and were maintained remotely by the US Coast Guard. Today, Boston Light is the only lighthouse remaining in the United States that employs a full-time keeper.

As lighthouses became less useful in navigation, the Coast Guard began to close them. At the same time, however, they became more appreciated for their historic and architectural value, leading to passage of the National Historic Lighthouse Preservation Act of 2000. Under the Act, any lighthouse designated by the Coast Guard for closure can be transferred at no cost to local governments and non-profit organizations. The lighthouse must be inspected to determine its condition, cost of renovation, and cost of maintenance. Groups seeking to acquire the lighthouse must go through an application process to demonstrate their financial and administrative ability to restore and operate the lighthouse. The organization must also commit to making the lighthouse available to the public for educational purposes. Many of Michigan’s lighthouses have been transferred under the Act to private organizations like the Michigan Lighthouse Conservancy, Historical Association of South Haven, Grand Haven Lighthouse Conservancy, and Holland Lighthouse Conservancy. These organizations have dedicated themselves to maintaining Michigan’s lighthouse, opening them to the public, and fostering appreciation for their historical and architectural significance. Private organizations have had mixed success saving Michigan’s lighthouses. Some have been restored and maintained in impeccable condition, like Point Betise and Grand Traverse, but others remain vacant, weathered, and badly in need of repair. 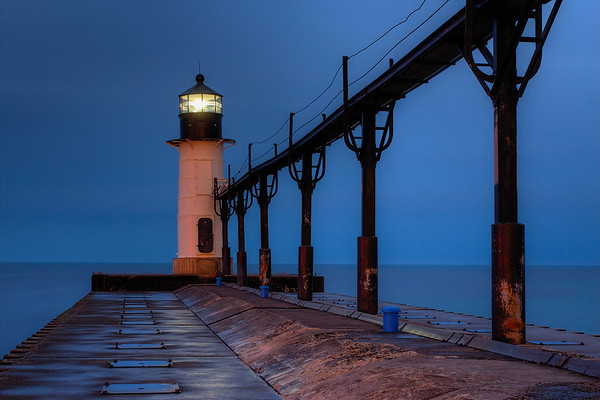