M-22 weaves in and out of federally protected national lakeshore on its way to Empire, a small shoreline village bookended by the Sleeping Bear Dunes National Lakeshore. Just a few miles south of Empire lies the site of Aral, a ghost town with one of the most notorious histories of any area along M-22.

Logging, Murders, and the Cult

Aral developed as a logging town much like the small logging villages of Pierport and Burnham to the south and Glen Haven and Good Harbor to the north. Aral’s mill was managed by Charles Wright, a man with a violent temper and lawless reputation. On August 10, 1899, two Benzie County police officers set out from Beulah to Aral to place a lien on the mill for unpaid taxes. Wright learned of their intent and vowed that if anyone interfered with the mill he “would drop them.” When the officers arrived, Wright murdered them in cold blood, continued running the mill as if nothing happened, and left the bodies lying along what is now M-22. Word of the murders spread quickly. A posse of twenty men formed from Benzonia and Beulah. Wright quickly shut down the mill and fled into the woods. The posse arrived in Aral and captured Wright’s Indian interpreter, Peter Lahala. When Lahala refused to reveal Wright’s whereabouts, they hung him by his neck from a pine tree in town known as “The Hanging Tree.” The posse told Lahala to kick his legs if he decided to talk. As he was hanging, a group of men from among the mob that had formed emerged from the woods with Wright. Lahala was spared. Wright was sentenced to life at Jackson prison.

With Mr. Wright out of the picture, Aral came under the control of “King” Ben Purnell’s House of David cult in 1908. Purnell claimed to have dreamt that a white dove sat on his shoulder and told him that he was the sixth son of the House of David. He continued preaching the gospel according to the dictates of the dove. By 1916, the cult had 1,000 followers. Cult members were required to surrender all of their possessions to Purnell, live a communal lifestyle, refrain from shaving, and refrain from eating meat. To the outside world, the cult was best known for its band, which played all over the country, and its baseball team, whose bearded members barnstormed the country in the 1930s and 1940s. The House of David’s control of Aral lasted from 1908 until the area’s forests were depleted. The last resident moved out in 1922, and Aral became a ghost town.

Today, the only remnants of the town are a plaque near the end of Esch Road off of M-22. The hanging tree has fallen, but still lies on the ground behind the plaque.

M-22 continues north to the town of Empire. Empire is emblematic of the patchwork development of the Sleeping Bear Dunes National Lakeshore. Indeed, it is unusual to have a town effectively break a national park or lakeshore in half. However, Sleeping Bear Dunes was the product of a bitter fight between landowners and the National Park Service. As a result, the federal government was unable to acquire as much land as it wanted, and areas like Empire were spared from inclusion within the park.

The idea of a national park is generally credited to artist George Catlin, who, on a trip to the Dakotas in 1832, expressed his concern that westward expansion threatened America’s best natural attractions. Catlin proposed that such attractions might be protected “by some great protecting policy of government . . . in a magnificent park . . . A nation’s park, containing man and beast, in all the wild and freshness of their natural beauty!” In 1864, Catlin’s vision became a reality when Congress donated Yosemite Park to California for use as a state park. Eight years later, Congress designated Yellowstone as “a public park or pleasuring ground for the benefit and enjoyment of the people.” Since Wyoming was not a state, Yellowstone’s management was left to the federal government and the first national park was born.

Over the next fifty years, Congress designated numerous additional national parks, which were placed under the control of the Department of the Interior. In 1916, the National Park Service was created within the Department of the Interior, and was directed to “conserve the scenery and the natural and historic objects and the wild life therein and to provide for the enjoyment of the same in such manner and by such means as will leave them unimpaired for future generations.” Numerous additional parks were dedicated over the next fifty years. In 1966, Congress dedicated the first national lakeshores at Indiana Dunes and Pictured Rocks.

By the 1960s, however, the United States population was booming, the economy had expanded tremendously since World War II, and it became far more difficult to reconcile private property rights with the public’s interest in national parks. When Yellowstone and Yosemite were dedicated, there were few, if any, private claims on the land. By the 1960s, however, the federal government had to navigate private property interests in order to acquire land for national parks, relying on private dedication of lands and on the messy eminent domain process. In the Sleeping Bear Dunes region, private property interests were entrenched, to put it mildly. Loggers began acquiring land nearly a century before. The lakeshore was lined with piers to facilitate shipping. Numerous farms developed in the 1900s where forests were cleared in the 1800s.

Prior to the Great Depression and following World War II, the area marketed itself as a tourism destination and numerous individuals purchased vacation homes in the area. Cities like Empire became entrenched. The proliferation of private property ownership and the development of towns like Empire created obstacles to creation of a unified national lakeshore. In 1963, for example, Glen Lake residents sought to create a Sleeping Bear Dunes - Glen Lake Park within the present-day national lakeshore. However, the state owned only 2,044 of the 5,800 acres proposed for the park. The land would remain a patchwork of privately owned property, county and city parks, and state-owned land. In the 1950s and 1960s there were various federal proposals to create a unified national lakeshore.

The federal Save Our Shoreline (SOS) Bill proposed to set aside 26,000 acres for the national lakeshore. However, the designated land was chosen with little to no regard for any private property interests. Later proposals ranged between 54,000 and 72,000 acres. The varying proposals and “top-down” style of governance from Washington DC led to distrust and dissension among residents along M-22. Some perceived these legislative efforts as a threat to their private property rights. For others, they were an affront to local conservation efforts. Many believed that locals had effectively conserved the lakeshore and were better positioned to do so in the future than the federal government. An August 31, 1961 editorial in the Traverse City Record-Eagle titled “A Disregard for The People’s Rights” summed up the bitterness following a public hearing on the proposed park. The editorial read, “An appalling and almost unbelievable deminstration of how far bureaucaratic planners in Washington can go in disregarding the people’s rights in the name of the public welfare was given by Conrad L. Wirth, director of the National Park Service, at a public meeting on the proposed Sleeping Bear Dunes National Recreation Area Wednesday night at a jam-packed Glen Lake Community High School.” The editorial continued, “Wirth and his staff are operating in a vacuum completely out of touch with the human right of Americans to hold property against the capricious whim of seizure by government agencies.” It concluded, “Residents of the Sleeping Bear region are rightfully fighting mad . . . . The fight against such seizure must go on, and it deserves the full support of all of us.” For his part, Mr. Wirth appeared to do little to quell the distrust. He reportedly opened the meeting by proclaiming, “I’m a bureacrat and proud of it.” He went on to dismiss concerns of property owners and declared, even with the knowledge that more than 1,000 homes would be seized by the federal government, that the area in the proposed park was completely “undeveloped.” Justified or not, the early legislative efforts led to prolonged battles in the 1960s over efforts to create the national lakeshore. There were more than 1,400 tracts of private land that had to be acquired. According to author Theodore Karamanski, “A heavy-handed, poorly planned land acquisition program reinforced the bitterness that surfaced during the decade of struggle that preceded authorization.” Karamanski opines that these legislative blunders ultimately limited the land the federal government was able to claim for the national lakeshore.

The result is that present-day Sleeping Bear Dunes National Lakeshore is a checkered patchwork of private and public property. It was hard enough to acquire individually owned tracts of land, but politically impossible to seize established towns like Empire. As a result, Empire and its neighbor Glen Arbor to the north stand out as islands surrounded by the expanse of federally seized and protected national lakeshore. Empire is like many towns along M-22, owing its formation to the logging industry. Settled in 1851 when the schooner “Empire” ran aground in the harbor, the village would become one of the busiest and most successful lumber towns in Michigan by the turn of the century.

At its height, Empire had thriving lumber mills, two 500 foot piers stretching into Lake Michigan, and a population over 1,000. The last mill burned in 1917, however, and the population quickly declined. Empire would benefit from tourism in the ensuing decades, and remained firmly rooted when ideas sprang up for a unified national lakeshore. It would have been far too difficult to incorporate Empire into the proposed national lakeshore, so it was carved out. The result is that Empire effectively breaks the Sleeping Bear Dunes National Lakeshore in half.

Empire is home to the Sleeping Bear Dunes National Lakeshore headquarters and ranger station, the Empire Museum, and countless gift shops, antique shops, galleries, and restaurants, all located in a compact downtown just off of M-22. The Lake Michigan shoreline sits just beyond downtown off of Niagra Street.

The beach’s most prominent landmark is the Robert Manning Memorial Lighthouse, the newest lighthouse along Lake Michigan’s shoreline. Mr. Manning was a local fisherman who ventured on to Lake Michigan every day that the weather permitted. He had long wished that there were a lighthouse on the shore to safely guide him home. After his death at the age of 62 on 1989, his family and friends raised enough money for the lighthouse, which was dedicated in 1990. The lighthouse is more than just a memorial, however. Since its opening, the United States Coast Guard has included it on its maps as an active aid in navigation. The Robert Manning Lighthouse marks the entrance to Empire’s beach, which is renowned for its views of two of Sleeping Bear Dunes highest bluffs. To the south, Empire Bluff rises 400 feet above Lake Michigan and is accessible from another of Sleeping Bear Dunes’ hiking trails. The Empire Bluff trail begins at a trailhead on Wilco Road just off of M-22. It is only 1.5 miles, but can be difficult due its steep grade. Those able to complete the hike are rewarded with one of the best views in Sleeping Bear Dunes. From atop Empire Bluffs, one can see South Manitou Island and miles of Lake Michigan shoreline.

The beach at Otter Creek, once the site of Aral, Michigan

Empire Bluff, a short hike from a trialhead near M-22 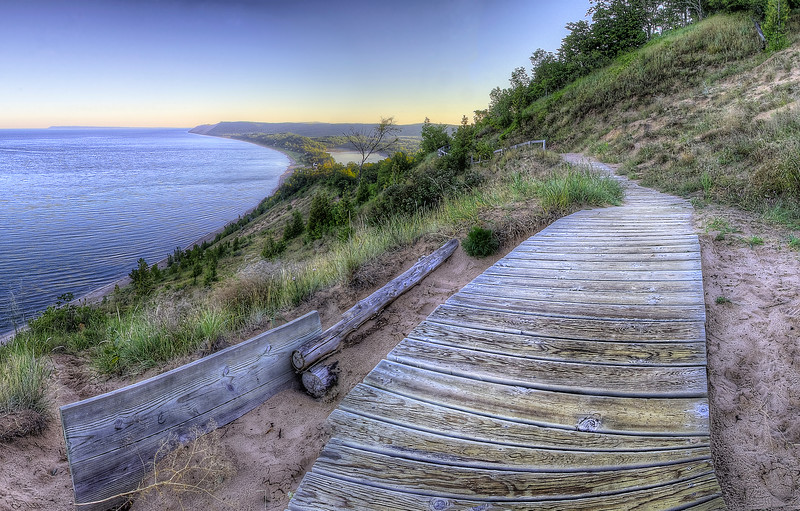