North of Pierport, M-22 winds through numerous apple orchards before entering Arcadia, Michigan and passing one of M-22’s crown jewels, Arcadia Bluffs Golf Club. Arcadia Bluffs opened in 1999, sits on 245 acres of bluffs overlooking Lake Michigan, and, best of all, is open to the public. The course drops 225 feet from its highest point down to the shoreline bluff, which sits 180 feet above Lake Michigan. All eighteen holes on the course feature breathtaking views of Lake Michigan. Many of the holes run directly along the course’s 3,100 feet of direct lakefront atop the bluff. Golf Digest Magazine ranks Arcadia Bluffs as the 10th best public course in America. Golf Week Magazine ranks it as the 24th best public or private course in America. It is one of the youngest courses to appear on either list. Arcadia Bluffs caters to non-golfers as well. It has a lodge and upscale dining room attached to its clubhouse. It has a large deck and lawn overlooking Lake Michigan, and an outdoor bar that is open during summer months. In recent years, it has become a popular pastime to take in the sunset with a glass of wine from one of the many Adirondack chairs on the lawn. On weekend nights in the summer, a Scottish bagpiper plays live to add to the ambiance.

The Town of Arcadia

Continuing north past Arcadia Bluffs Golf Club, M-22 runs through downtown Arcadia, a small town located along Arcadia Lake. The lake is connected to Lake Michigan through a channel. Although Arcadia Lake is relatively small, it is deep enough to accommodate recreational and fishing boats coming in from Lake Michigan. Its marina is located on the north side of the lake and is a popular launching point into Lake Michigan for fisherman. Like many of the towns along M-22, Arcadia’s roots date to the days of the logging industry. Settled in 1866, Arcadia was soon dominated by a wealthy Milwaukee businessman, Henry Stark. Mr. Stark established a lumber mill near the shore and spearheaded an effort to dredge the sandbar that separated Arcadia Lake (then called “Bar Lake” because of the sandbar) from Lake Michigan.

Arcadia’s pattern of development, like that of Pierport’s, demonstrates how M-22 was relatively unimportant in its first few years of existence. Arcadia’s business district developed not along M-22, but closer to the Lake Michigan shoreline and along the terminus of the Arcadia and Betsie River Railway. It was the railroad and the river, not M-22, that brought lumber to the towns. When railroads were not used, logs were transported by sled over snow cover. Thus, traffic tended to move east and west from the forests to the town, rather than north and south between towns. It was more profitable for businesses to open along an east-west route than it was to open along M-22’s north-south route.

This was only enough to delay, but not prevent, the factory’s demise. It closed in the 1930s amid the economic collapse of the Great Depression and the decline in available lumber. The few resorts that were built near the end of the logging era sustained a small tourism industry. The town also served a fledgling agricultural industry, as many of the clear cut forests were transformed to farmland.

Today, downtown Arcadia is small, featuring one bar, an ice cream shop, and a few antique shops. The marina thrives during the summer and during fall salmon season. The town’s best known resort, Camp Arcadia, has been in operation since 1923. It is a Lutheran owned camp with 123 acres of lakefront land, and is a popular family destination in the summer. As the town’s focus shifted away from logging and toward tourism, M-22 became more important to the area’s economy. The few businesses in Arcadia today lie more along M-22 than along the old downtown streets.

M-22 continues north out of downtown Arcadia and ascends a high hill to one of the most scenic spots along the lakeshore, the Arcadia Overlook Roadside Park. Sitting directly alongside M-22, the Arcadia Overlook has been a popular stop since the 1950s. It sits on one of the highest points along the entire Lake Michigan shoreline and features views over Lake Michigan extending to thirty miles. There are a number of park benches for picnics, and stairs leading to multiple viewing decks.

Continuing north past the Arcadia Overlook, M-22 veers inland near the C.S. Mott Nature Preserve. The preserve consists of hundreds of acres of native forest along the Arcadia Dunes. The trails lead to “Old Baldy,” a 400 foot sand dune along the shore of Lake Michigan that can be seen for miles from the north and south. There are two trailheads along M-22, providing a 2.5 mile hike to the top of Old Baldy. The C.S. Mott Nature Preserve is the first of many examples along M-22 of once private lands donated for public use. The Nature Conservancy, through a donation from the Charles Stewart Mott Foundation, purchased the land and established the preserve in 2003, protecting it from future development. Similar efforts have led to the protection of thousands of acres of land along M-22, most notably in and around the Sleeping Bear Dunes to the north. For those unable to travel far enough north to visit the Sleeping Bear Dunes, the C.S. Mott Nature Preserve provides an excellent alternative.

Arcadia Lake at sunrise from the shoulder of M-22

The view from Old Baldy Trail off of M-22 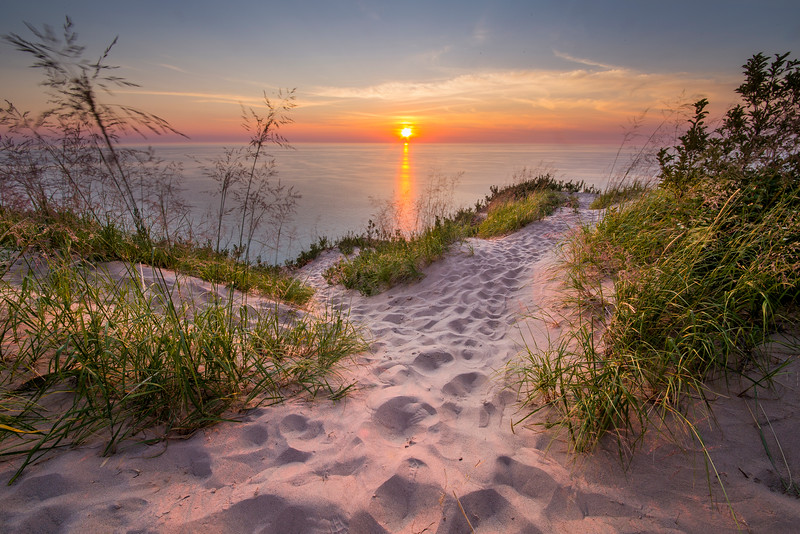 Arcadia at the turn of the century