North of Empire, M-22 splits, with old-M-22 (present-day M-109) veering to the left and running closer to the shoreline and present-day M-22 veering to the right before continuing north through the middle of Glen Lake. Old M-22 rises into thick forests before coming to one of the most popular and easily accessible attractions along the lakeshore -- Pierce Stocking Scenic Drive atop the Sleeping Bear Bluff.

The scenic drive is not only one of the best places to view the dunes and lakeshore, it is also an area rich in legend and history. Sleeping Bear Dunes was designated by Congress as a federally protected National Lakeshore in 1970, but its history dates to the Algonquin Indians that inhabited the area long before European settlers arrived. We know that the Algonquin Indians revered the dunes because their legend of the dunes’ creation has survived to the present day. Once upon a time long ago, according to the legend, a mother bear and her two cubs were driven from the Wisconsin shoreline by a massive forest fire. The mother bear and her cubs swam across Lake Michigan, but were separated as the cubs became too exhausted to swim. Once the mother bear reached the shore, she climbed atop a high bluff to watch and wait for her cubs to arrive. She would spend the rest of her life roaming the shore searching for her cubs, who never arrived. One night, the mother bear was buried beneath sand as she slept, and over the ensuing years the dunes rose over her sleeping body, creating Sleeping Bear Bluff in the Sleeping Bear Dunes. Even today, the mother bear still sleeps deep within the dunes, still waiting for her cubs to arrive. In reverence to the perseverance of the bears and the loyal dedication of the mother, The Great Spirit Manitou created North and South Manitou Islands at the very spot where the cubs perished.

The later history of Sleeping Bear Dunes is similar to that of other areas along M-22. It served the fur trapping and trading interests of the French in the 1700s. It became an important source of lumber in the 1800s. It suffered through the depletion of forests and the Great Depression in the early 1900s.

Two of the principal figures in the development of Sleeping Bear Dunes as we know it today were D.H. Day and Pierce Stocking. Mr. Day was a wealthy lumberman of the late 1800s and early 1900s. He owned over 5,000 acres of forested land, much of it in the Sleeping Bear Dunes area. Unlike other lumber barons along M-22, like Charles Perry and George Hopkins, Mr. Day harvested selectively and protected younger trees in order to preserve the forests for the future. One of Mr. Day’s largest and best known forests was Day Forest Hill, one of the first managed forests in the nation, and the present-day site of Pierce Stocking Scenic Drive. Mr. Stocking was born in 1908 and spent his youth working as a lumberman for Mr. Day and others. In 1948, he purchased Day Forest Hill from Mr. Day. Mr. Stocking had seen many lumbermen come and go during his lifetime. He was born and worked during the tail end of the lumber boom, and then lived through the Great Depression and the decline of the lumber industry. Unlike other lumbermen who had abandoned the area to find the next virgin forest, Mr. Stocking had an appreciation for the natural beauty of the area. He stayed, harvested only mature trees in his forest, and closed his mill after his initial harvest. Mr. Stocking would spend the remainder of his life walking the dunes and sharing its beauty with others. In 1960, he conceived of a road to the top of the dunes. By 1967, the road opened, and the area became known as Sleeping Bear Park. He operated the road himself until his death in 1976. Mr. Stocking’s drive and Day Forest Hill became part of Sleeping Bear Dunes National Lakeshore the following year. The drive was named Pierce Stocking Scenic Drive. It is hard to imagine Sleeping Bear Dunes without the drive, and hard to imagine what the drive might look like if Mr. Day had pursued harvesting more aggressively or Mr. Stocking had maintained logging operations past his initial harvest.

Today, 80,000 cars travel the 14.7 mile Pierce Stocking Scenic Drive annually. The drive begins just off of Old M-22. It winds through Mr. Day’s forest and over dune bluffs high above Lake Michigan. There are twelve marked points of interest along the drive. The most notable are the overlook of Glen Lake, trailheads leading down to Lake Michigan, and viewing decks perched directly atop Sleeping Bear Bluff. Pierce Stocking Scenic Drive is 450 feet above Lake Michigan at its highest point. It provides views for miles in all directions from its multiple points of interest.

Old M-22 continues north from Pierce Stocking Scenic Drive to Glen Lake, one of the most beautiful and popular inland lakes in Michigan. It is surrounded by the Sleeping Bear Dunes on its west shore and rolling forested hills on its east shore, and has some of the clearest water of any inland lake in the area. Glen Lake is technically two lakes connected by a channel under the M-22 Bridge. The larger east part of the lake is referred to as “Big Glen Lake” and the smaller west part of the lake is referred to as “Little Glen Lake.” Old M-22 runs along the shore of Little Glen Lake. A small roadside park at the north end of Little Glen Lake provides public access.

Across the road from Glen Lake sits Dune Climb, one of the most popular attractions in Sleeping Bear Dunes. Dune Climb is a 400 foot high dune popular among kids who love to climb its heights and run or roll back down. There are picnic tables, restrooms, and a bookstore at the base of Dune Climb. For the more ambitious, Dune Climb connects to trails leading to Lake Michigan and providing outstanding views of surrounding scenery.

M-22 continues north into the village of Glen Haven. Glen Haven was established in 1857 as “Sleeping Bearville.” It was a logging town which consisted of eleven buildings at its height. The village was purchased by the National Park Service in 1970. Glen Haven’s final resident was not evicted until 2007, however, underscoring the difficulty that the National Park Service had in acquiring property for the lakeshore. The buildings that remain in Glen Haven house a restored general store and blacksmith shop, and two maritime museums in the former life saving station and cannery. Just past the maritime museums sits the trailhead for the Sleeping Bear Point Trail. The trail is a 2.8 mile loop through dunes and down to the lakeshore along the point created by the south end of the Glen Arbor bay. Although the trail is lower than Pierce Stocking Scenic Drive, it still provides great views of Lake Michigan, North and South Manitou Islands, and the Glen Arbor shoreline. It is also accessible for free and far less crowded than Pierce Stocking Scenic Drive.

Dune Climb on a summer morning

Glen Lake from across M-22 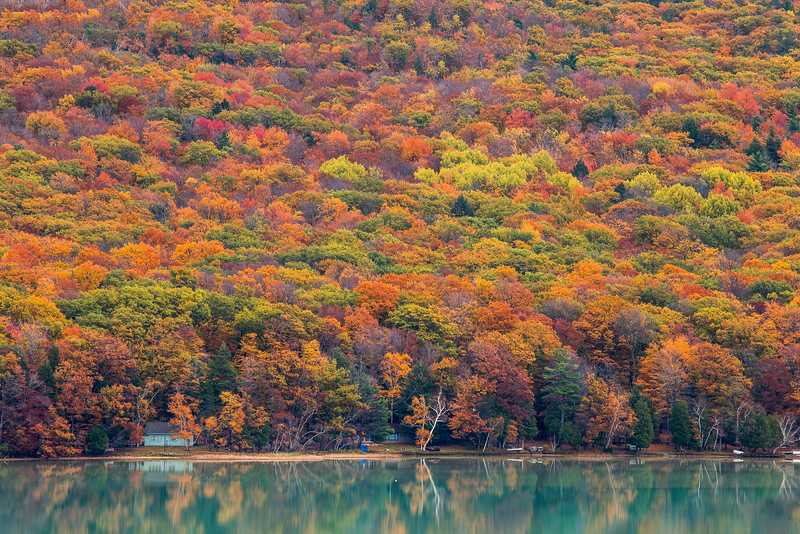